The purpose of this Technical Application Note is to provide an example of how you can build your own stereo vision system using two FLIR machine vision cameras with OpenCV algorithms and the Spinnaker API.

Stereo Vision is an imaging technique that can provide full field of view 3D measurements in an unstructured and dynamic environment.  Each pixel in a digital camera image collects light that reaches the camera along a 3D ray. If a feature in the world can be identified as a pixel location in an image, we know that this feature lies on the 3D ray associated with that pixel.  If we use multiple cameras, we can obtain multiple rays.  The intersection of these rays is the 3D location of the feature.

In this example, two cameras are fixed in place and images of a known calibration target are taken. From these images, lens distortion is removed and the images are rectified. For dense stereo algorithms, typically the images from the cameras must be remapped to an image that fits a pin-hole camera model. This remapped image is called the rectified image. An algorithm then finds matches of pixels or features in the image to determine disparity.

In this application note, two cameras were mounted on THORLABS brackets, dovetail rails and a SLIK tripod to make sure they are leveled. The cameras need to be firmly fixed in place relative to each other. Small changes, especially in the vertical axis, will misalign the scan lines used by the algorithm to find matches. This misalignment can cause a poor disparity map. 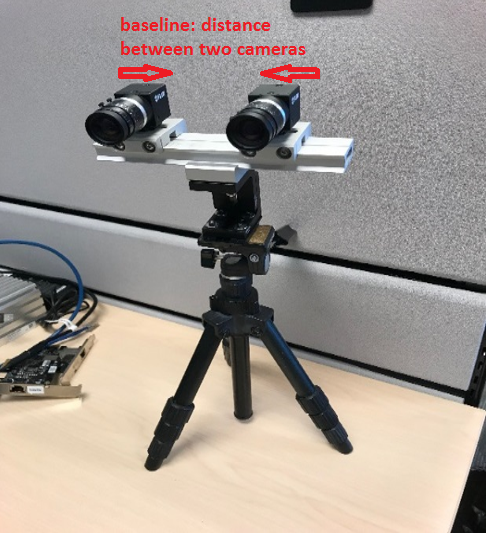 In this technical application note, a checkerboard pattern was printed out for stereo calibration. OpenCV interpolates the location of each corner to the sub-pixel level. Then it uses those positions to calculate matrices for intrinsic distortion, extrinsic rotation and translation of cameras relative to each other. Ideally, this pattern should be held in place. To maximize the field of view coverage for calibration, move the pattern close or use a larger pattern.

For stereo vision to work, images need to have enough detail to find corresponding pixels in the rectified images. The lens should be in focus for most of the range of distances your application requires. Closing the aperture can increase the depth of field so that a greater range of distances is in focus but this will decrease the amount of light reaching the sensor.

For best results while calibrating, in SpinView set Exposure Auto to Off and change it so the checkerboard pattern is clear and the white squares are not over exposed. After the calibration files are generated by the C++ console application, gain and exposure can be set to auto in SpinView.

Tighten the adjustment knobs on the lens to keep the focus and aperture fixed after configuring the preferred exposure setting.

How to Display Real-time Disparity Map

The opencv_stereo_vision folder should be placed in the same folder location as the other Spinnaker examples. This is the src folder for the Spinnaker SDK (the default location for the source folder is C:\Program Files\Point Grey Research\Spinnaker\src). 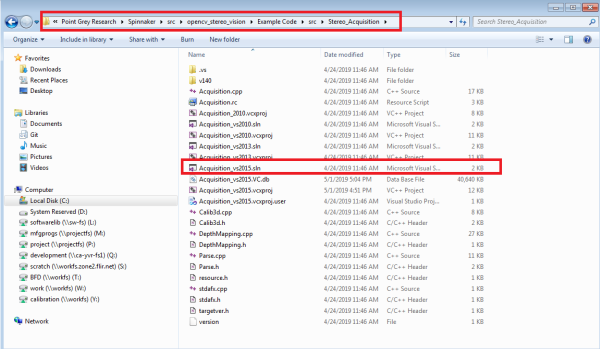 4. After you have successfully built Stereo_Acquisition_vs2015.sln, open command prompt and navigate to opencv_stereo_vision\Example Code\bin64\vs2015 folder.

5. Enter command: Stereo_Acquisition_v140.exe –help to see instructions on how to run this program. 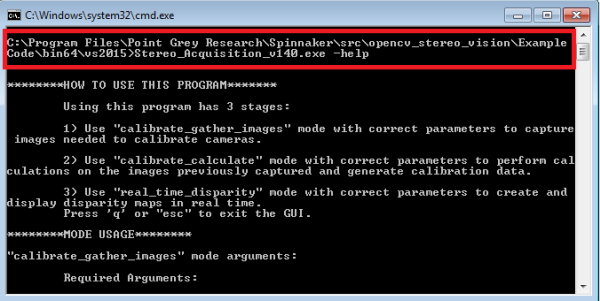 This mode is to capture images needed to calibrate cameras. In this program, each camera is software-triggered to capture 6 images (12 images in total) upon user input. These images are used later for calibration. You can set the path for where the images will be stored using the command below:

In order for the OpenCV algorithm to find matches of pixels or features in these images, it is important to capture an image of the target at different positions within the ROI (Region of Interest).

Note: these are examples of 6 uncropped, unprocessed images taken straight from one of the two cameras while running calibrate_gather_images, to be used by the opencv algorithm in calibrate_calculate

This mode is to perform calculations on the images previously captured and generate calibration data. When the “calibrate_calculate” mode is executed, three .yml (calibration) files are generated - 2 intrinsic files and 1 extrinsic file. The path for these calibration files must be the same as where the calibration images are saved. The extrinsic file (about 3 KB) contains the required matrices and physical parameters for both cameras to use stereo vision in OpenCV. 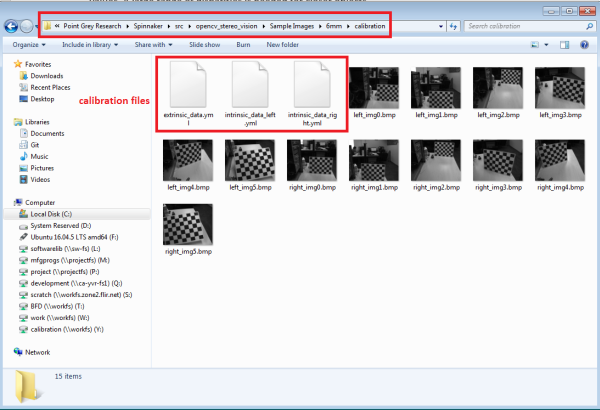 This mode is to create and display disparity maps in real time.

The DepthMapping() function in DepthMapping.cpp is called (found in C:\Program Files\Point Grey Research\Spinnaker\src\opencv_stereo_vision\Example Code\src\Stereo_Acquisition) to load the extrinsic file created from calibrate_calculate and display the disparity maps as shown below: 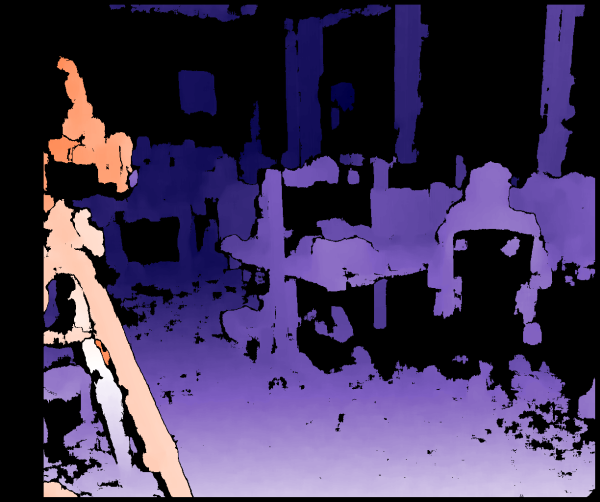 Some physical properties are needed aside from the images captured for calculating depth from disparity. The data set used in Stereo_Acquisition_vs2015.sln are: 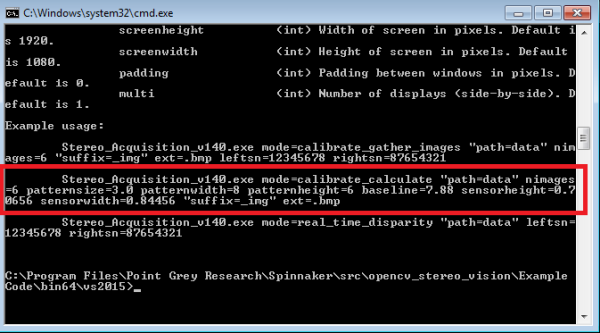 When you set up your own stereo vision system, you need to change the values for these properties according to your camera setup. For example, the baseline used in this example is 7.88 cm. However, if your application requires a different baseline, you can change this value when executing Stereo_Acquisition_v140.exe mode = calibrate_calculate as shown above.

The OpenCV StereoBM and StereoSGBM algorithms found in the DepthMapping.cpp file are used to provide disparity in 16 bits. The last 4 bits are fractional so the disparity is accurate to 1/16 pixels. To get the actual float value, you need to separate the output (short int) into its fractional and whole components, cast as float, and finally add them. 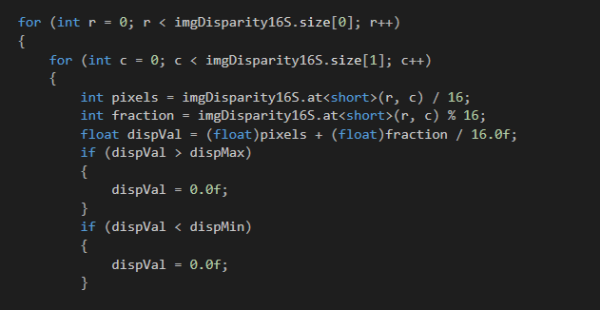 High resolutions do not work as well with the Stereo Block Matching algorithm as they significantly increase the time to process and make real time disparity calculations impractical. High resolutions also require more accurate calibration. Being ¼ of a pixel off with 1000 x 700 is not too substantial. However, that inaccuracy in calibration makes a bigger difference at 2400 x 2000 where it would be nearly a pixel off.

In theory, a higher resolution can give higher accuracy disparity maps, however in practice it is hard to achieve. Binning can be used to get a smaller resolution without modifying sensor size calculations.

1. Intrinsic calibration is done first which involves each camera individually. It is also called camera matrix. Intrinsic parameters are specific to a camera and they include information such as focal length and optical centers.

2. Then stereoCalibration() is done which uses the intrinsic calibration and provides relative extrinsic information.

By default, the calibration settings are hard coded in Acquisition_vs2015.sln (C:\Program Files\Point Grey Research\Spinnaker\src\opencv_stereo_vision\Example Code\src\Stereo_Acquisition) to work well for around 1000 x 800 resolution. Stereo mask size and ndisparities in disparity map are the biggest factors. You can change these settings when you execute Stereo_Acquisition_v140.exe in “real_time_disparity” mode using sliders. 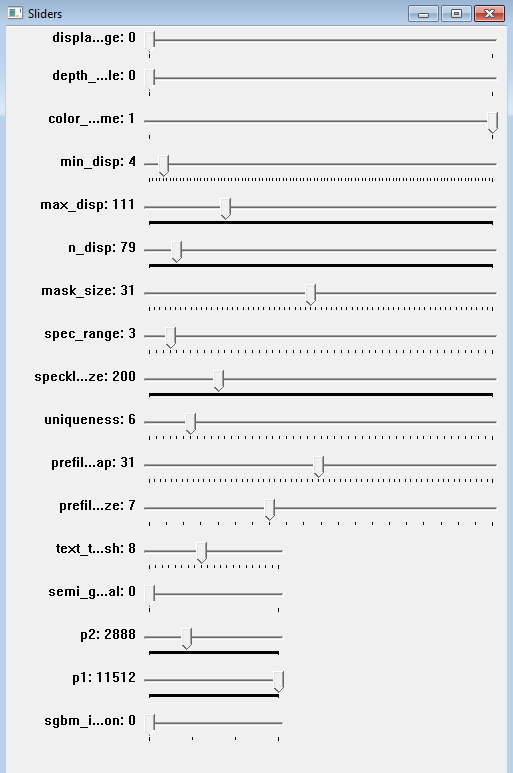 This setup can detect changes accurate to around 2 millimeters at 1.2 meters away.

Note: The default values provided in the example assume you are using the exact setup documented here.