All over the world champagne is associated with luxury and celebration. Not only is it a symbol of wealth, each year on New Year’s Eve millions of people all over the world pop the cork off a bottle. But up until now the mechanics behind the taste of this special drink remained clouded in mystery. That situation has changed now that researchers are trying to uncover its mysteries. The most recent revelation is that we should reconsider the way we pour this fizzy wine.

The only real champagne is produced exclusively within the Champagne region of France, from which it takes its name. Fittingly, it is in that region, at the University of Reims, that most of the champagne research is being done. The university’s most recent discovery is that the way champagne is currently poured, causes loss of aroma and thus of taste. The researchers claim that champagne should be served like beer. Thermographic cameras have played a vital part in this recent discovery.

The fizz in champagne is produced by fermentation. “After the first fermentation, champagne is basically a white wine”, explains Guillaume Polidori, director of the thermomechanics department of GRESPI (the Group for Research in Engineering Science). The GRESPI’s thermomechanics department is one of the world’s leading research institutes studying the effects of heat upon the mechanical properties of materials. “When they put the champagne in the bottle”, Guillaume Polidori continues, “They add a mixture of yeast and sugar to start a second fermentation. Fermentation produces CO2 and because the CO2 gas has nowhere to go, it dissolves in the white wine. When the bottle is opened, the dissolved CO2 disperses, thus creating the bubbles in champagne.”

Researchers used a FLIR SC7000 series thermal imaging camera to visualize CO2 as it escapes during the pouring of a glass of champagne.

For a long time it was thought that the bubbles in champagne just added to the fizzy sensation in the mouth, perhaps giving it a little acidic bite, without having any further influence on the champagne taste. This assumption was proven to be utterly incorrect as an earlier study (published in 2009 in the journal Proceedings of the National Academy of Sciences) showed that the CO2 contains most of the champagne’s aroma. It has proved that there are up to 30 times more flavor-enhancing chemicals in the bubbles than in the rest of the drink.

This new finding has seriously changed the way experts look at the bubbles in champagne and the researchers of GRESPI wanted to further research this phenomenon. They set out to test how the way champagne is poured influences the loss of CO2, given the fact that loss of CO2 also means loss of taste. They tested the CO2 contents of champagne before and after the pouring process, using different pouring techniques at different temperatures. They found that the colder the temperature, the smaller the loss of CO2 during the pouring process, thus presenting the first scientific proof that serving champagne chilled helps to contain the CO2 – and thus the champagne’s flavor. Even more surprising, however, was the result of the comparison between different pouring techniques. They found that the classic way of serving champagne was not very effective at all.

The researchers compared two different ways of pouring a glass of champagne: the ‘champagne-like’ and the ‘beer-like’ pouring method. The ‘champagne-like’ method consists of holding the glass vertically, allowing the champagne to hit the bottom of the flute. This is currently the prevailing way of serving champagne and sparkling wines in bars, clubs, and restaurants. With the ‘beer-like’ pouring method, the glass is held aslant; allowing the champagne to flow along the inclined flute wall, and the flute is then tilted to an upright position during the pouring process. This is the method typically used to serve beer.

The researchers tested the CO2 levels before and after pouring for both pouring methods and at three different temperatures: 4, 12, and 18 °C. The results showed that the beer-like pouring method caused significantly less CO2 loss in comparison to the ‘traditional’ method. 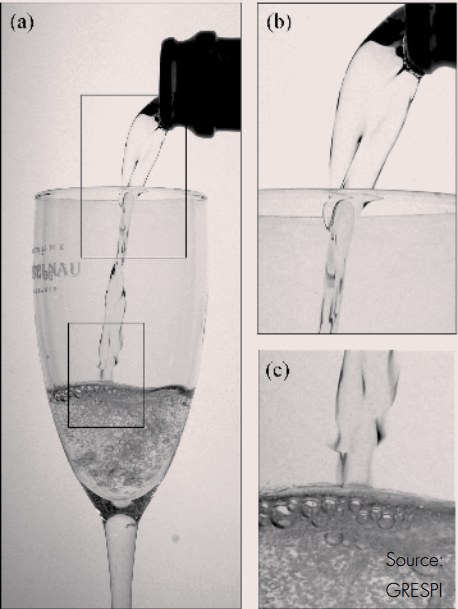 When champagne is poured in the ‘traditional way’, the contact surface with the air is much larger and there is a great deal more turbulence.

The beer-like pouring method, where the champagne flowed along the inclined flute wall, was found to be much less turbulent and released less gas than the more traditional pouring method. The ‘champagne-like’ way of serving - pouring the drink vertically so it hit the bottom of the flute - generated a thick head of foam that quickly vertically extends and then progressively collapses during serving.

But the bubbles aren’t the only way in which the CO2 leaves the champagne, the CO2 also escapes by diffusing through the contact surface of the champagne with the air. Experiments were performed a few years ago on the respective losses of CO2 during the pouring of champagne in a flute (published in 2002 in Annales de Physique) and it was found that for every single CO2 molecule which escapes from the champagne in the form of bubbles, four others directly escape by diffusion through the free contact surface of the champagne with the air. Diffusion is therefore strongly suspected to be the main pathway through which dissolved CO2 escapes during the pouring of a glass of champagne.

When pouring champagne, the sparkling fluid forms a jet – or tongue – as it falls from the bottle into the glass. This effect partly explains the difference in CO2 loss, according to Guillaume Polidori. “With the traditional way of serving, this tongue is much longer than with the beer-method. This means that the contact surface of the champagne with the air is significantly smaller if you pour the champagne like beer. We think that this also partly explains the difference between the two pouring techniques.” 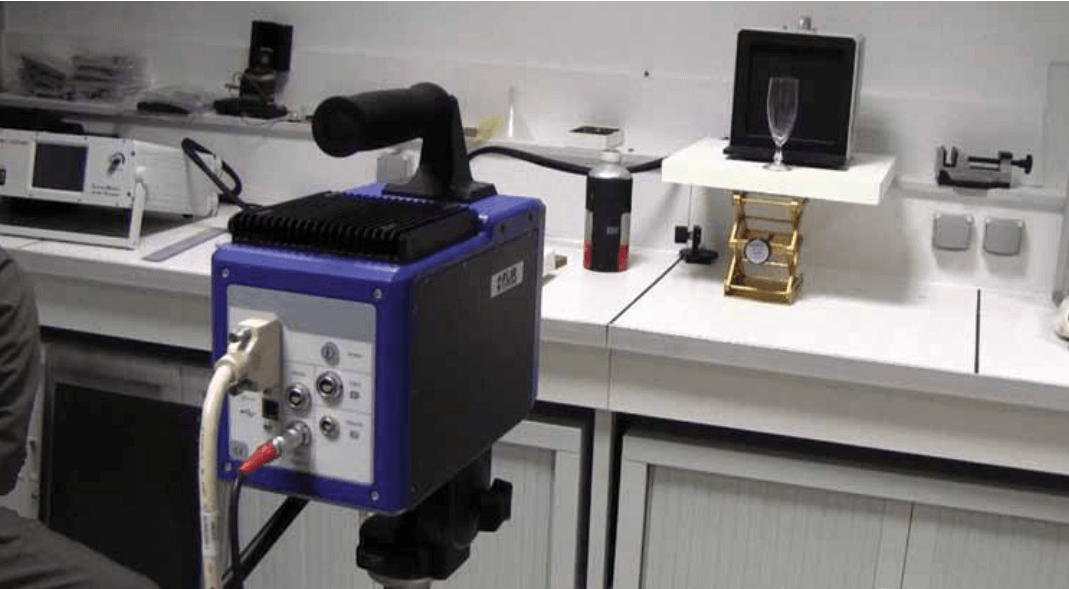 As the diffusion process is invisible to the human eye – measuring it presented the researchers with a challenge. The solution to this challenge proved to be a thermal camera. “We used the FLIR SC7000 Series Camera to film the CO2 as it dissipated during the pouring process. This visually confirmed what the test results showed,” explains Guillaume Polidori.

The thermal image clearly shows that less CO2 escapes if the glass is tilted while pouring champagne with the ‘beer-like’ way of serving.

The FLIR SC7000 Series is a very flexible open system that can be adapted for any situation possible. It provides the highest possible sensitivity, accuracy, spatial resolution and speed. This series of advanced thermal cameras is specifically designed for academic and industrial R&D applications where you need leading edge sensitivity and performance to produce results. The detector that powers this example of the SC7000 Series is a cooled Indium Antimonite (InSb) detector. With a sensitivity of about 20 mK (0.02 °C) and an image resolution of 640x512 pixels the camera can make even the smallest temperature differences visible. The integration time is adjustable in 1 μs increments. Combined with the external triggering mechanism this also allows the SC7000 to capture even the most fleeting of events.

The visual confirmation of the effect of differing pouring techniques on the diffusion process by the SC7000 thermal camera provided the researchers with a further scientific validation of their experimentation, but it also played another crucial part according to Guillaume Polidori. “We wouldn’t get all this press attention if we hadn’t been able to visualize it. That’s how it works: to get published you have to produce solid and interesting new research, but if you want it to get noticed by the press you need a visual trigger as well.” And Guillaume Polidori thinks the thermal camera played its part well. “We were even contacted by a journalist from the New York Times.” He attributes a large part of this attention to the influence of the thermal cameras. “Just scientific data isn’t as spectacular – or as convincing – as when you can see it with your own eyes. So thermography played a very important role in this research both to confirm our data and visualize it.”

But visualizing the CO2 emission wasn’t as easy as just pointing a thermal camera at the champagne glass. GRESPI researcher Hervé Pron mostly worked with the FLIR camera. He explains why it’s not that simple: “The CO2 absorptions observable by thermal cameras are quite weak because this gas molecule has only a strong absorption peak in the detector bandwidth at 4.245 μm. So we needed to look at that specific bandwidth.” To do that the group used an external band-pass filter. “The camera operates at a bandwidth of 3 to 5 μm. To look at the thermal emission from the escaping CO2 we acquired an external band-pass filter that was centered on the CO2 emission peak and only allows infrared that has the bandwidth of the particular wavelength region we need to pass.”

Hervé Pron was pleased with the camera’s performance. “We needed a thermal camera that’s easy to calibrate, very accurate, lightweight, easy to use and has a high resolution. This camera delivered just that. We could see enough detail, without too much background interference, or ‘noise’.” 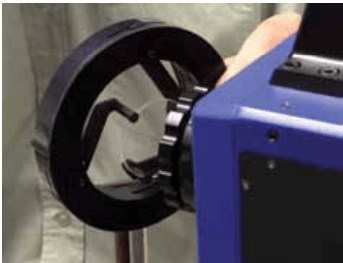 To visualize the escaping CO2 the researchers used an external band-pass filter. 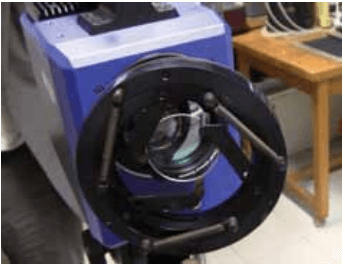 The external band-pass filter is centered on the CO2 emission peak.

In recent years, glassmakers have proposed to consumers a new generation of champagne tasting glasses, specially designed, with a well-controlled CO2 release during the entire tasting process. This has been the driving force behind the rapidly growing interest behind gaining a better understanding and depicting each and every parameter involved in the release of gaseous CO2 from glasses poured with champagne or sparkling wine.

The next step in champagne research is to produce a complete mathematical model of CO2 dissipation during the pouring process which includes the multiple ways of CO2 discharge during the pouring process. This model is under construction, according to Guillaume Polidori. “I can’t say too much but we’re working on it. But if we pull it off that would be a very useful discovery, as glassmakers could use that model to design the perfect champagne glass.”