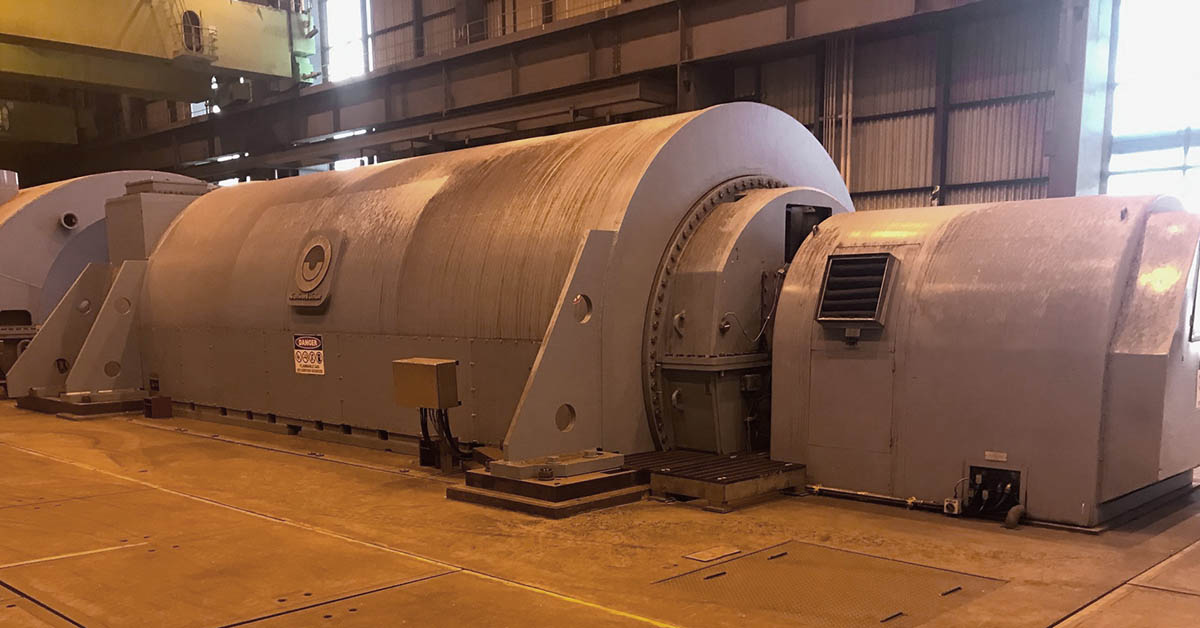 Condition monitoring engineers with the Australian energy company, AGL Energy, have found an efficient and safe way to inspect hydrogen-cooled generators at their AGL Loy Yang power plant. They use a FLIR GF343 optical gas imaging (OGI) camera to scan the generators for leaks from a distance, ensuring their own safety while also speeding up the leak detection process and saving their company thousands of dollars with every inspection.

AGL Loy Yang is the largest power station in the state of Victoria. The power station includes four 500+ megawatt turbo generators which were brought into service between 1984 and 1988. Upgrades through major maintenance programs and plant enhancements have taken generation capability to over 2200 megawatts today.

The maintenance of generators is critical for the safe and efficient operation of the power plant. The turbine power generators produce large amounts of heat while operating which must be mitigated in order to maintain generator efficiency. In this case, AGL Energy cools the generators with hydrogen gas (H2). While H2 is a very efficient coolant, it is also highly combustible when mixed with air. And even with the best systems in place to contain the hydrogen gas, leaks can occur.

Turbine generators will typically leak at an acceptable level during operation. However, when these leaks become too big or numerous, it poses a significant safety and explosion risk. Planned outages every few years are usually the ideal occasion to replace outdated equipment and to inspect the generators for leaks.

Over the years, AGL engineers used a variety of methods to inspect the generators. “One of our go-to leak detection methods was putting soapy water on each joint or component and then looking at bubbles that appeared on the leaks,” says Peter Fanning, condition monitoring engineer at AGL Energy.

The AGL Energy maintenance team realized that there had to be more productive ways to perform leak inspections. In the end of 2016, the Loy Yang team was able to borrow a FLIR OGI camera from another AGL plant. The first inspection with the FLIR camera immediately convinced the team of the value of OGI, so they decided to purchase a camera for use at the AGL Loy Lang plant.

While no OGI camera can see H2, it is possible to use OGI to find leaks in power generation systems with the help of a “tracer gas”: a secondary gas injected into the system to help identify leaks.  In this application, AGL Energy uses carbon dioxide (CO2), which the FLIR GF343 can see quite easily. During a planned shutdown, AGL engineers purge the generator turbines of H2 and inject CO2 in its place. The team then uses the GF343 to identify fittings and components that are leaking.

The AGL maintenance team is very pleased with the new FLIR camera. According to Peter Fanning, one of the biggest benefits of this camera is the time savings. “Before we had this camera, an inspection tour around the generator took us somewhere between 12 hours and multiple days – if we were not able to find the leak immediately. Today, we can inspect the generator in 6 hours, and do this very thoroughly at that.”

The FLIR GF343 is an optical gas imaging camera that lets you see carbon dioxide leaks quickly, easily, and from a safe distance.

Cut down search time by 50%

“Considering the money our company is able to save with this camera, and the quick payback time, purchasing the FLIR GF343 was a no-brainer for us,” says Fanning.

Thanks to the reduced leak inspection time, AGL is also able to limit the generator outage duration and reduce the lost generation revenue. Fanning does the math: “Using old leak detection methods, our inspection work resulted in lost generation revenue equivalent to two days on average. Assuming the FLIR camera can cut down our search time by 50%, we save the cost of 24 hours of lost generation, which amounts to $672,000 per instance.”

On top of that, AGL can achieve a significant reduction of H2 usage due to reduced casing leakage. AGL estimates this reduction to amount to $30,000 per year. Finally, the reduced man hour costs for the maintenance team looking for leaks is estimated at $20,000 per year.

The AGL maintenance team appreciates the safety advantages of using a FLIR GF343 as well. Although the company follows stringent safety procedures during inspection rounds, older detection methods, such as the soapy water, required the inspectors to closely approach the H2 leak source. With a FLIR optical gas imaging camera on the other hand, the team can inspect the equipment at a fair distance, depending on the size of the leak.

Another drawback of the older detection methods is that they included quite some guesswork. The soapy water method is far from efficient: looking for a leak in an unknown location may take hours. In addition, this method only works for tiny leaks since too much hydrogen flow will push the solution aside without forming bubbles.

“The visualization is invaluable, and it gives us much more confidence in pinpointing the leak location,” says Fanning. “The leak is so clearly visible in the camera picture: I often compare it to a cuttlefish shooting ink.” 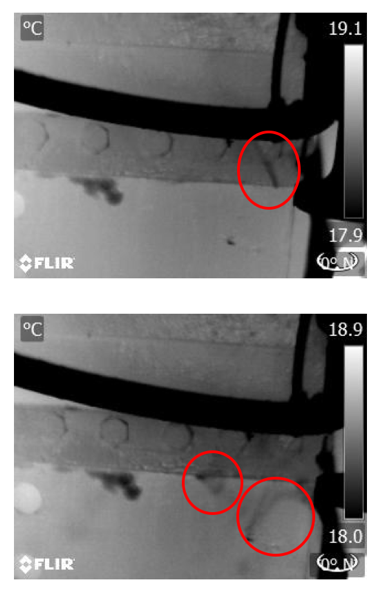 Peter Fanning, AGL Energy: “The visualization of leaks is invaluable, and it gives us much more confidence in pinpointing the leak location.”

“Also, being able to demonstrate the leak to colleagues on site and rectify it straight away has saved us a lot of time and money. Before, we had to write down where we had found the leaks or mark it up on the equipment, which is far more cumbersome.” 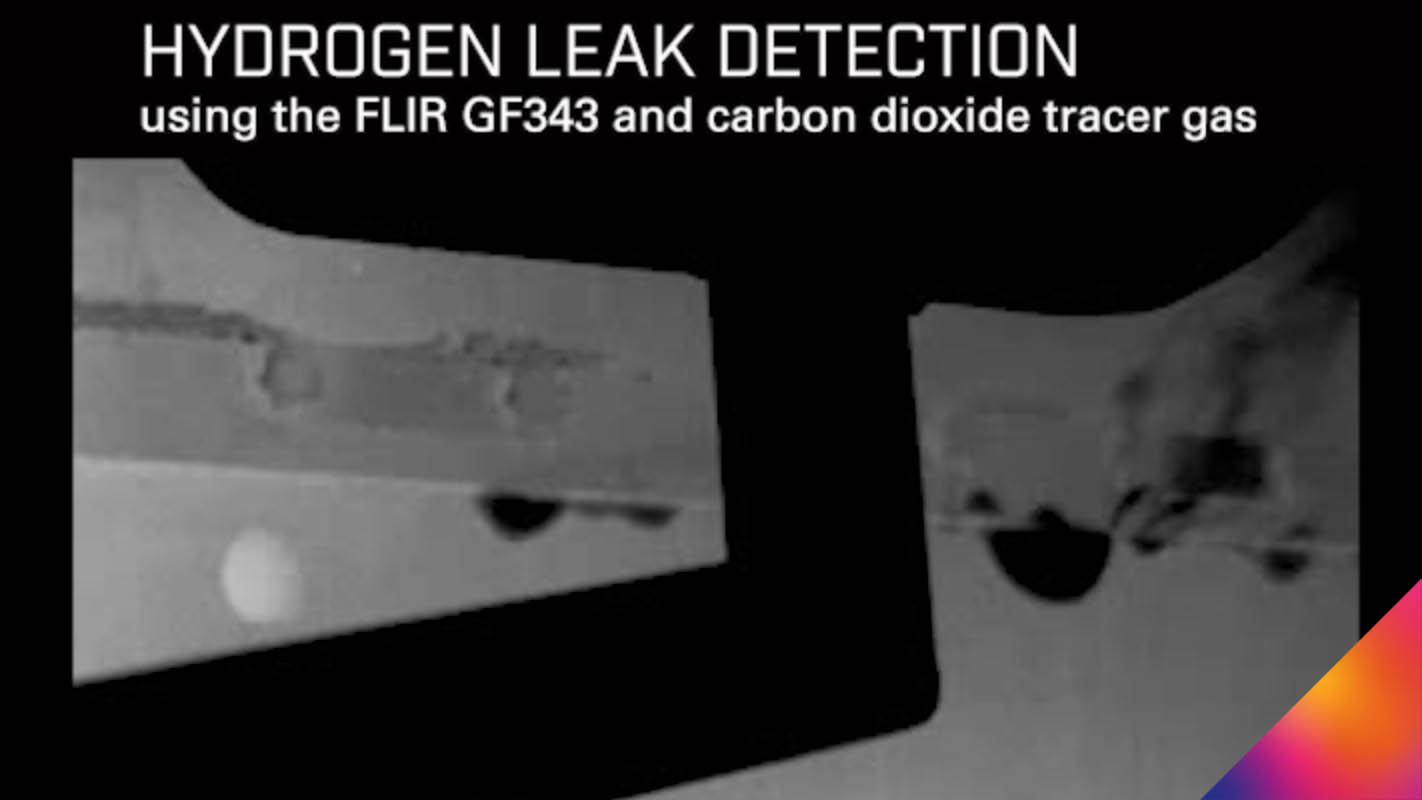 The maintenance team considers using the FLIR GF343 for the inspection of more equipment in addition to the generators. “We have several kilometers of lines that run into the power station. We could use the camera to scan for leaks during any type of pressure test. We just inject the equipment with tracer gas, and off we go.”